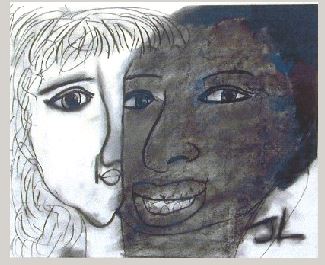 Jonathan Lerman
(b. 1987)
Jonathan Lerman is an artist with autism. He was born in Queens, NY, and currently resides in the Upstate New York suburb of Vestal.
Jonathan Lerman began to lapse into long silences at the age of two, and the next year he was diagnosed with autism. With little ability to communicate verbally, Lerman suddenly began drawing at age ten. Although the reason for Lerman’s unexpected impulse to draw is unknown (but perhaps related to the death of his grandfather), it is clear that these early drawings were a means of giving order to and assembling his fragmented visual world. KS Art in New York gave him a solo exhibition in 1999. His charcoal drawings include portraits of real people as well as figures from his imagination. Lerman composes with a confident hand filling the page with strong accentuated lines and dramatic shadows that capture the essence of the human face and the depth of emotions therein. Lerman is experimenting with color and incorporating background in his compositions. His IQ is purported to be 53.