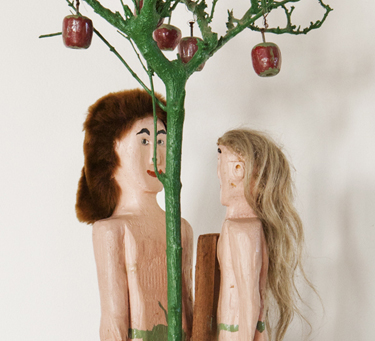 Adam and Eve with Satan
One of the few remaining Carpenter
masterpieces.
12″l x 34″h

“There’s an old story about wood and it’s true… that there’s something in there, under the surface of every piece of wood.”

Carpenter was born in Brownstown, Pennsylvania, in Lancaster County, and received eight years of formal education. In 1901, his father moved the family to Waverly, Virginia. At twenty-three years of age, Carpenter established his own lumber mill. Beginning in 1916, he and a friend operated a summer theatre for five years. Carpenter retired from his lumber business in 1955 and opened a roadside icehouse and produce stand.

Carpenter began whittling with his pocketknife after World War II. With the encouragement of his wife, he carved actively from 1955 on. With a pocketknife and simple hand tools, Carpenter fashioned fanciful animals, famous people and fantastic creatures from boards, roots and driftwood. He derived his ideas from the original shape of the wood, but also from bible stories. His works were painted with enamel and latex housepaint.