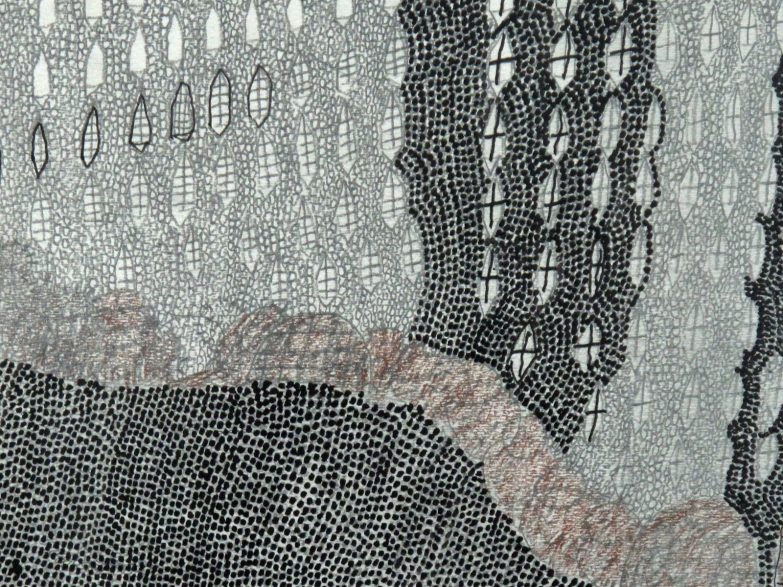 I try to play it by ear. “Easy does it”, like they say in AA. I had a friend who said, “inch by inch, life’s a cinch; yard by yard, life is hard.” That’s basically it. — Rodney Thornblad

Rodney Thornblad was born in the Bronx in 1959. He finds his subjects in contemporary prison scenes, medieval battles and Biblical scenes, particularly The Last Supper and Crucifixion. He chooses to work on a large scale, taking months to complete one drawing. He recently completed a medieval battle scene, 36″ x 72″, with his usual attention to minutely detailed figures and the large scale overall tableau. He is now working on a Last Supper that is even larger. He works with great concentration and isolates himself, even in a group studio situation. He frequently uses a Walkman to listen to rock ‘n roll while he draws at HAI. Thornblad is close to his parents and has expressed his appreciation for his family’s support through his illness.
Thornblad found out that he had mental illness when he was twenty-one. He openly speaks about a severe drinking problem that he had during his twenties. He traveled around, visiting Florida, California, Texas and Europe. Now approaching the age of 50, Thornblad regularly attends AA meetings to help him cope and maintain an alcohol-free life.
While in his 30’s, Thornblad changed his style of drawing from small contemporary sketches in lead pencil to his current style of large scale drawings with minute figures. He begins by sketching in lead pencil, coloring his work with colored pencils and finally outlining the figures in black ink .Thornblad regularly sells his drawings and his most recent major work, “The Last Supper,” purchased by Patch Adams, was featured in Raw Vision.
Thornblad says that his themes express his life struggles. His Battle of Hastings series portray his inner turmoil. His series of Last Supper drawings reflect his religious devotion. He says that his drawings help him with his struggle with alcoholism and mental illness. In addition to praying for himself and others, his religious pictures signal his effort toward hope. Drawing gives him some sense of purpose and stability. Thornblad says that without it he feels lost and without direction. He constantly strives to find himself.
Thornblad has participated in the HAI Studio since its inception about 18 years ago. ( Hospital Audiences Inc.)